Presenting the Results of the Context Studies Program in Subotica 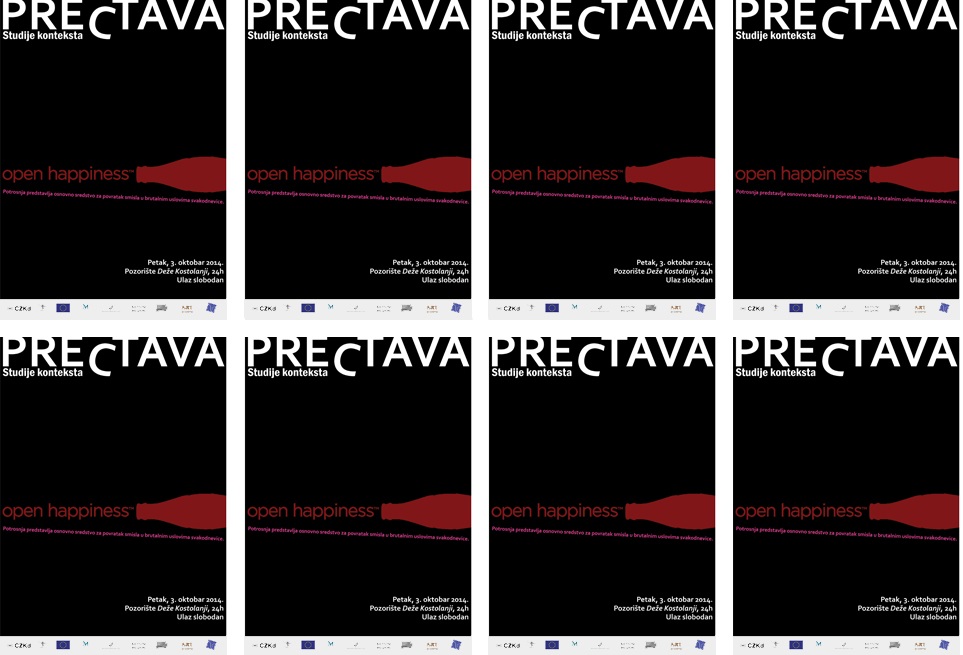 Context Studies – Diversity of Diversity: The Alternative Models of Production

PRESENTATION OF THE RESULTS OF THE CONTEXT STUDIES PROGRAM IN SUBOTICA

The presentation of participant’s workshop results, within the framework of the program Context Studies – Diversity of Diversity: The Alternative Models of Production organized by the Center for Cultural Decontamination in collaboration with the YUCOM Center from Nis, the Sent from Novi Pazar and the Active Region from Subotica, will be held on the 3rd of October 2014. Program participants from Subotica have been working within the outlines of the two thematic lines of the project: Brecht as a Method and Writing in Public: Debating and Translating.

Exhibition of the Visual workshop for creative writing

EXHIBITION OF THE VISUAL WORKSHOP FOR CREATIVE WRITING

The Visual workshop for creative writing aimed to address the “immediate and pressing” problems of young people by conflating the specificities and different languages of literature and visual art. The problems that the workshop tackled ranged from local to global ones, from objective issues to subjective ones, from the individual concerns to collective ones, from social, political and cultural questions to those concerning the process of artistic creation.

The workshop stressed that the artistic freedom is not something that is given but reclaimed and accomplished by creativeness and talent that needs different methods, concepts, techniques and strategies in order to come about at all.

During the course of the workshop, the participants were empowered – through the process of acquiring both theoretical and practical knowledge – to find the most suitable and appropriate ways to artistically express their personalities and affinities, as well as being able to materialize those expressions in forms of different artworks or art projects.

The artworks that are going to be exhibited represent the outcomes of a collective process of thinking and creative work.

One part of the exhibition features finalized artworks like photographic novels, a photo-box as object-art, as well as a sound installation. The other part of it is more of a documentary display of tools and other things used during the workshop, that obtain the status of artworks by the virtue of being shown in a gallery-like setting.

Thematic section: Brecht as a Method

The “Prectava” is not an usual theater show. The “Prectava” is in fact an theatrical depiction of a silenced protest against the system that we are all forced to live in – the one enclosed by the imposed criteria, standards, norms and measures that the “majority” obediently except. It is us that are contributing to the reproduction of that system, since we are a part of it. Our protest is not directly expressed, but molded into an artistic form that we came up with through dialogues, discussions and rehearsals, as well as through observation and research of ourselves, of our fears, our struggles and our sense of freedom. This method led us to incorporate our personal stories into play, little pieces of ourselves, which aimed, accordingly, to caricature as well as to concretize and transfer the problems of a limitless consumer society characterized by the terrorizing free-market laws, experienced in a number of different ways.

The dramatic personae represent thus a combination of imaginary characters and actors – actors wanting to be characters and characters wanting to be actors, of actors wanting to be themselves and simultaneously whishing not be. In this way, various types of people under the burden of society of consumption’s material existence are seeking to make a change. The aims is to get by, to survive the coming times by transgressing the boundaries of what is offered as comfortable, therefore doing away with the fear of extreme situations. Most importantly, the initial goal should not be the change of the social system, but of us, encompassing the development of self-consciousness and of the need for a change.

The aim of “The Context Studies” is questioning the meaning of “public” – opening a space for critical practices related to the immediate context and the heritage of civil society. The courses have been simultaneously taking place in Belgrade (Center for Cultural Decontamination, coordinator: Ana Isaković), Subotica (coordinator: Branislav Filipović, Active Region), Niš (coordinator: Osman Balić, YUROM Centar), Novi Pazar (coordinator: Enes Halilović, Sent), in the period of February-June 2014. The participants of the program “The Context Studies: The Diversity of the Diversity” had an opportunity to produce their own programs, with the help of the mentors and selected lecturers, and to present their production in October in their cities and joint event in Belgrade.

The team of the project The Context Studies – The Diversity of the Diversity:

The project is supported by:

Secretariat for Culture, City of Belgra