War in times of love 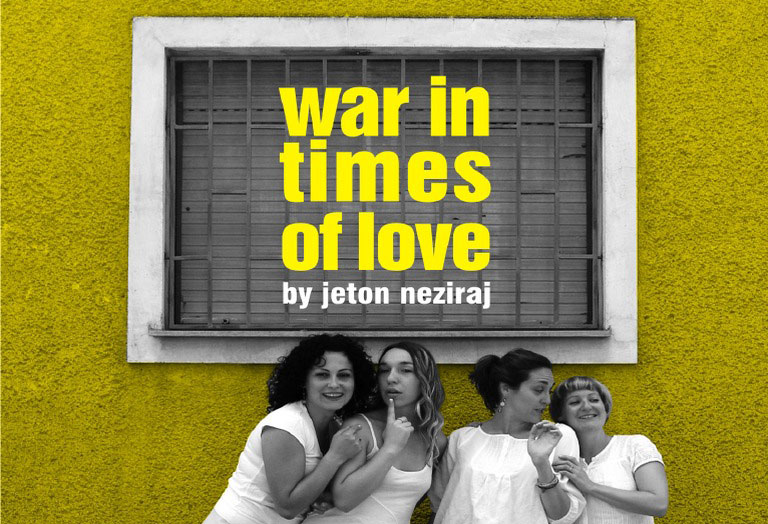 WAR IN TIMES OF LOVE

Opening: 5th of May 2015, National Theater of Kosovo

Duration of the performance: 80 min.

In the play, “War in Times of Love”, four strange women from Kosovo tell stories about their intimacies, passions, madness, secrets and desires. They’ve created a shared imaginary world, in which fun and games become a shelter that helps them survive.

The 28 scenes of the play flutter in front of the public’s eyes, like fairy tales with magicians, revealing with humour, sentimental stereotypes and clichés, the women’s stories and their conversations: about love, fear, revenge and the tragic past.

However much it might all sound ‘hot’, I’m afraid we have to tell you, not a single actor takes off her clothes. Are you depressed? Well, damn it, every other play in Europe today has an actor or actress who whips their clothes off on stage. But no, not in this play. The most you’re going to see are their ankles, the palms of their hands, and the cheerful cheeks and faces of these four wonderful actors, that’s it. And, let us not forget: there is also a male actor in the play (but don’t worry, he isn’t violent at all).

After three successful international plays, Blerta Neziraj, the young director from Kosovo, brings another provocative play to the public, with wonderful songs and dance, in which 5 talented young actors tell, warts and all, their small stories, both tragic and comic, but above all, the stories of women in a beauty salon (and what does it matter that these stories were written by a man!!).

“These four women perform depilation and other forms of cosmetic torture whilst chatting about their love lives.  In the metaphorical use of the beauty salon, allied to this world of make-believe, beautifying often has to do with dissimulation – to oneself and to others – in order to make this post-war period both possible and bearable. And behind a rather provocative title – which has something of the oxymoron about it – reversing, so to speak, the ingredients of an explosive cocktail, the play reflects with both humour and imagination the break-up of ex-Yugoslavia. [Gilles Boulan, Le Billet des Auteurs de Théâtre, Paris]

“The Old Lady, who has no one left to listen to her, inevitably resemble those verses of Martin Niemöller at the time of the consolidation of National Socialism in Germany, in which he recounted how the Nazis first took the Jews, then the communists, and then the trade unionists, but he didn’t object as he was neither Jewish, nor communist, nor a unionist. But, when the Nazis came to take him as well, there was no one left to listen or react. Was it not so? Since the early nineties, we kept Niemöller’s poem on the walls of our rooms and offices, as a reminder of the disasters that can happen, and then all that hardship, disaster, war, violence followed and we passed through all this and today we are here and again, in the context of today’s circumstances and events, we are quoting verses of this poem. […] Now that “peace has happened,” everywhere around us we see beauty salons where conversations about nails and haircuts occur, and where “beauties of the night” are “produced,” which are revealed in the morning. In all our cities, the biggest production is beautification and this is a result of the dominance of trade in relation to production. In our cities, the foreigner sees progress and democracy only on the basis of how many boutiques are open, selling global brands; international companies with their names misspelled in English; they see good cuisine, restaurants, cafes, entertainment… [Borka Pavićevič, theater critic, Belgrade]

“Four women are confined in a mental hospital that their joint imaginations have transformed into a beauty salon. The words of love dominate over those of war, though traces of the latter can still be detected underneath. Central importance has been granted to the character of an old lady who finds it impossible to tell her own story (probably because it is so unbelievable and cannot be really heard by anybody), and whose function it is to regulate their lives together in this improbable beauty salon. This suggests the difficulty of constituting a memory about events that are beyond words, and thus the redeeming necessity of imagination.  [David Larre, Au Poulailler, Paris]