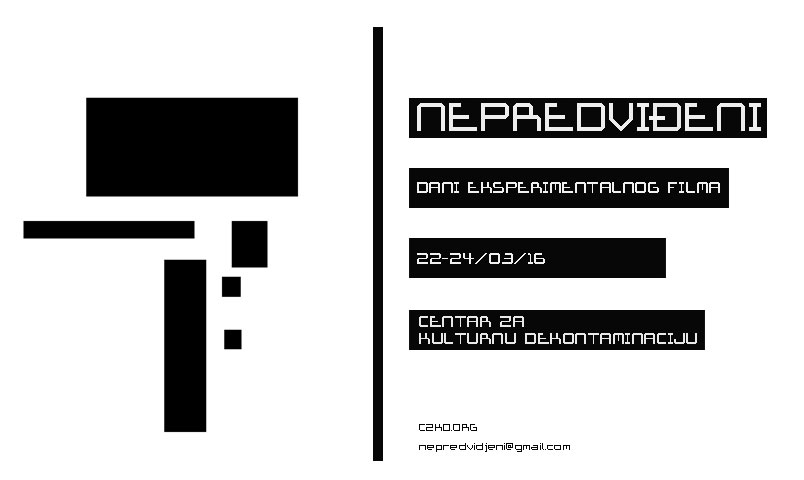 The title of the festival Unforeseen is reflecting the current position of experimental film within the cinematic apparatus in Serbia today. Our wish is for the festival to continue to reflect the future contemporary and unforeseen answers to a call for experimentation and for emancipated thinking on film.

In the part of the program dedicated to discussions we will invite the bearers of public cinematic infrastructure in Serbia to talk about the ways in which it is possible to support the development of experimental film.

The competition program will feature the selection of films submitted through a public call of the festival selected by a selection committee that consisted of Nevena Lazić, Adam Ranđelović and Ivica Đorđević.

The jury consisting of Petra Belc, Andrija Dimitrijević and Ognjen Glavonić will select a film or a number of films that stood out as the most fruitful answers to the call for experimentation in film.

The team of the Unforeseen

THE TIMETABLE OF THE UNFORESEEN FESTIVAL

The ones that leaped into the future, anticipating, forewarning, setting the motifs, themes and problems that “big” cinematography was to encounter. Those are the ones that have the entire experience of experimental film at their disposal. The history of film languages is their own resource that they treat with enthusiasm and confidence of a Bildungsroman’s subject. From the ecosystem, working process and song of “city landfill on ada huja in belgrade”, via textures of sight and sound from the film “Yeah” all the way to the shoot-out at the graveyard from the “Morning in Pink” the Film Leaflet is making itself heard, a film thinking by all means.

5 p.m. The Classroom: A Pataphysical Voyage through Avant-Garde Film or the Cases, Adam Ranđelović

Auguste Marie Louis Nicolas Lumière approached Luis Buñuel Portolés and said: “All that is worthwhile has been already filmed.”

Luis Buñuel Portolés slapped him and said: “But it is only 1949!”

Luis Buñuel Portolés did something surreal then, something that escaped our understanding completely. At that moment Antoine Marie Joseph Paul Artaud jumped from the window of the “Alfred Jarry” theatre and slapped himself on the face because he saw André Breton coming down the street. In reaction to that René-Lucien Chomette Clair went berserk and delivered a lethal blow to the head of Salvador Domingo Felipe Jacinto Dalí, Marqués de Pubol with a loaf of baguette. A couple of days after, they all joined the funeral procession following the death coach pulled by a camel. Only André Breton stopped half-way since he had not enough names length to go all the way with that morbid caravan.

Anti-Film as a Space of Freedom

At the beginning of the 1960s in the subterranean rooms of the Cine club Zagreb the Yugoslav experimental film became conscious of radical possibilities of its own creative position. During the next decade through the GEFF (Genre Experimental Film Festival) it started to be, in Branislav Miltojević’s words, “a big collective cineastic happening”. Owing to the anti-film’s polyglossia and to the enthusiasm then active filmmakers, a number of cinematic elements and ways of exploration of various states of mind came about only to be theoretically articulated many years after that. The mid-20th century remains to be one of the most interesting periods in the Yugoslav experimental film to be explored. There are still virtually unknown films made by women filmmakers that have to be looked into alongside the multilayered experiments of Belgrade’s alternative cinematography.

5 p.m. Classroom: Guerilla Film, “A Threnody for the Victims of Marikana” by Aryan Kaganof

Aryan Kaganof’s film “A Threnody for the Victims of Marikana” has “kidnapped” and brought back the alienated academic discourse on the place of the 2012 rebelling miners’ massacre in South Africa. Through that process, it named this murder a ritual therefore shedding light on the social truth of a “new democracy” and by using the experience of remix poetics in disclosing imperialist social, media and cultural mechanisms. We will discuss in what ways is this film experimental.

The openness of alternative film is reflected in the fact that it is devoid and actually cannot have any overall programs or manifestos. If we set out to take the amateur film as a representation of the innocence of their authors, the alternative film should be seen as an expression of the maturity of its authors.

8 p.m. Screening of the awarded films and presentation of the jury

9 p.m. Special program: Round table dedicated to the experimental film in Serbia

The Center for Cultural Decontamination,