The Joy of Europe 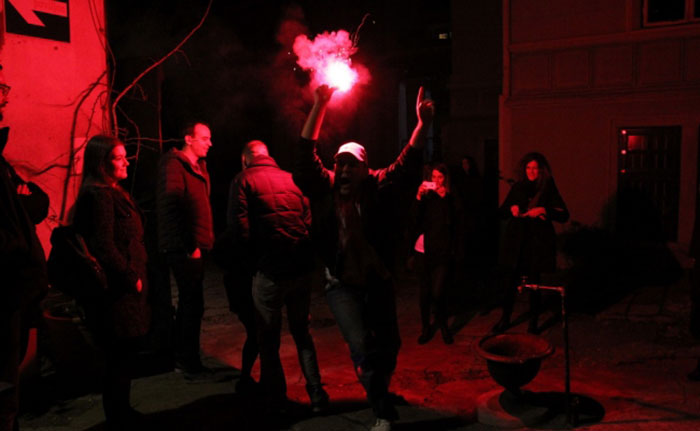 Sex does not exist, only gender exists. Gender is performative. Judith Butler

Bisexuality is the original form of live in human beings. Karl Gustav Jung

If we start with the premise that the despotism of capital is reflected in generalized violence among people, it follows that such a type of domination can be achieved only on provision that people are firstly turned against each other by distributing them in different social roles. When confrontation arises, each side consider the other as inhuman. J. Camate

A human is characterized by its work, the things it makes in its lifespan. The quality of its work depends on material circumstances of production at a certain time and place. In the same manner the state produces individuals and steers them towards certain productive goals. I was born on the same day of symbolic birth of a new Europe – the day when the Berlin wall fell. So, my birthday, the day that I came to the world as asexual being, overlapped with a sacral festivity that marked the beginning of new state relations in Europe. I was raised by my parents, but what about the kids raised by Europe? Ja am a contemporary of Europe, but I seldom see her, maybe only at graduation day. Therefore, I ask myself, what kind of children is Serbia raising? How did Serbia produced its young nationalist from the football stands, its brothers suckled by the ideals of Greater Serbia, the bellicose ideals of the 1990s? Why are those children needed by Serbia? Is Serbia preparing for some new wars or only as a contingency in the case it needs a dozen nationalist youth to command them and signal for charge? On the other hand, Serbia commanded by my contemporary Europe is being liberalized by imputing it the ideals of tolerance and generalized love. My friend Europe is digging trenches everywhere. What will Europe do about its fascists? What will Serbia do with its football stand heroes? Will the capitalism at a certain point decide to release its fascists to make even with me, and with you. You that are brought up by your mothers with the knowledge that sexual orientation is not given by birth but by an individual decision, by will. I am Europe!!! I am Europe!!! I am Europe!!!

Happy Birthday to us!

5.      Mother Europe
Milan Jovanović (28) is a performance and theatre artist living and working in Belgrade. After a number of theater productions, he focuses on performance at. His first performance “Yearning Flow” (2013) was directed by Bojan Đorđev while “Zodiac” (2015) was supported by Art Elle program. In 2015 he starts studying in the PerformanceHUB platform initiated by Marta Jovanović, with whom he continues collaboration within the platform that included workshops with widely known people from the world of performing arts. He participated in the Queer Salon in KC Grad with a voice installation. He attended the workshop of a well-known choreographer Nir de Volff in Berlin focusing on the Total Brutal method of theatre performance. N February this year his performance entitled “Revival” opened the Radisson Blu Artist in Residency program, and later it was published at the web-site of Getty Research Institute in Los Angeles. He also participated in Nezaket Ekici’s performance “Hatchet” at the opening of this year’s October Salon.