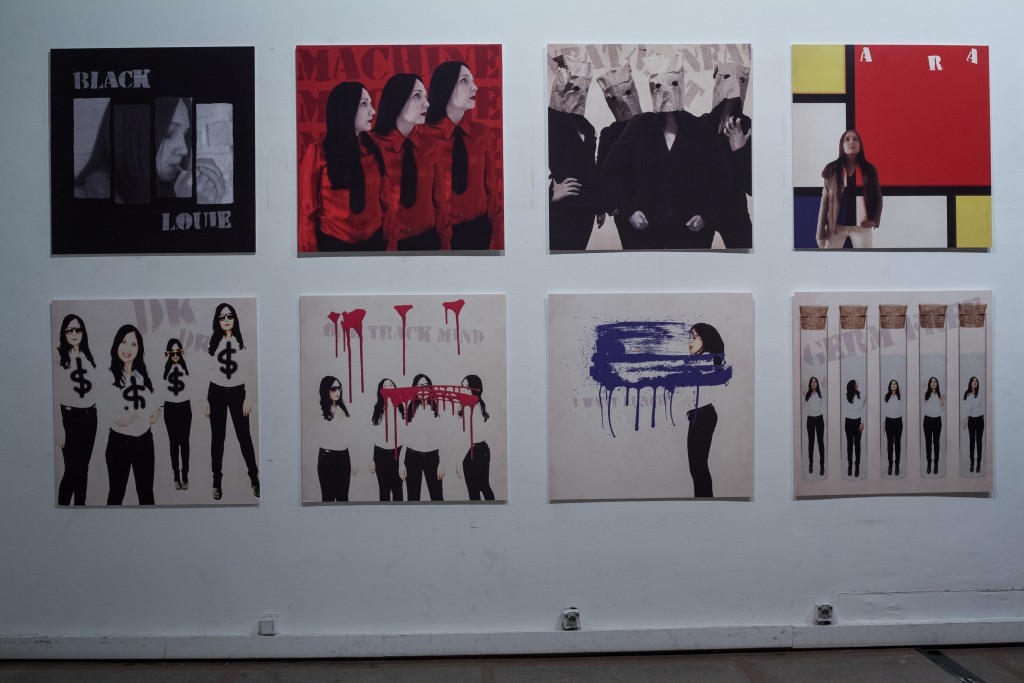 Curator: Aleksandra Sekulić
Two walls facing each other in the Center for Cultural Decontamination are taken by the works of two artists: Aurelie William Levaux from Liege and Marijana Markoska from Belgrade.

The artworks of Aurelie William Levaux, an artist from Liege, are drawings on textile. They represent an outcome of contextualization of the immediate dominant and critical discourse, of the alternative culture and feminist critique. The author dissolves reinterpreted images of colonial imaginary, religious representations and emphatic patriarchal constructs, turning them into liberating irony, stripes them bare and revives rebellion against reducing women and art to their traditionally allocated positions. Marijana Markoska is dealing with a culture formative for her – punk and fanzine aesthetics. Over the time it’s become even harder to revive the initial promise of freedom by establishing production in the DIY way. Culturalization of those practices – the process of devaluing the fanzine movement’s political subversiveness – has enabled an unbound inflation in prices of the material remains of an uprising. Markoska deviated from the usual paths of interpreting punk and fanzine culture by extracting their symbolic content from the abovementioned process and by following their trajectory with her own body, thus reenacting the formulations and mechanisms of reductionism that had tamed and normalized the movement through its reduction to mere design items.
The antagonistic structure of the exhibition suggests confrontation, it represents a reminder of today’s place of art – a wall that represents the border between the autonomous zone of art and radicalized social struggles. A wall that reminds of the barb-wire wall that governments have installed along their state borders, the ones that “we are going to build ourselves” to prevent those unforeseen to cross. Those walls were produced by the only “veritable tradition” of patriarchy, colonialism, capitalism and revived feudalism, and this exhibition deconstructs it with hijacked scenes, shouted-out sentences and bare bodies.

Some people think little girls should be seen and not heard / But I think, oh bondage, up yours! “Oh Bondage, Up Yours!”, single, X-Ray Spex, 1977

Si j’etais muette, je gravirais rapidement les echelons de ta consideration. De plaie quotidienne, je gagnerais le statut d’etre indespensable. [If I was a mute, I would gain your respect quickly. I got my chance to be indispensable owing it to my everyday toil.

Text on the drawing on textile by Aurelie William Levaux, 2016

Podrška /Suported by: Ministarstvo kulture i medija Republike Srbije/Ministry of Culture and Media of the Republic of Serbia