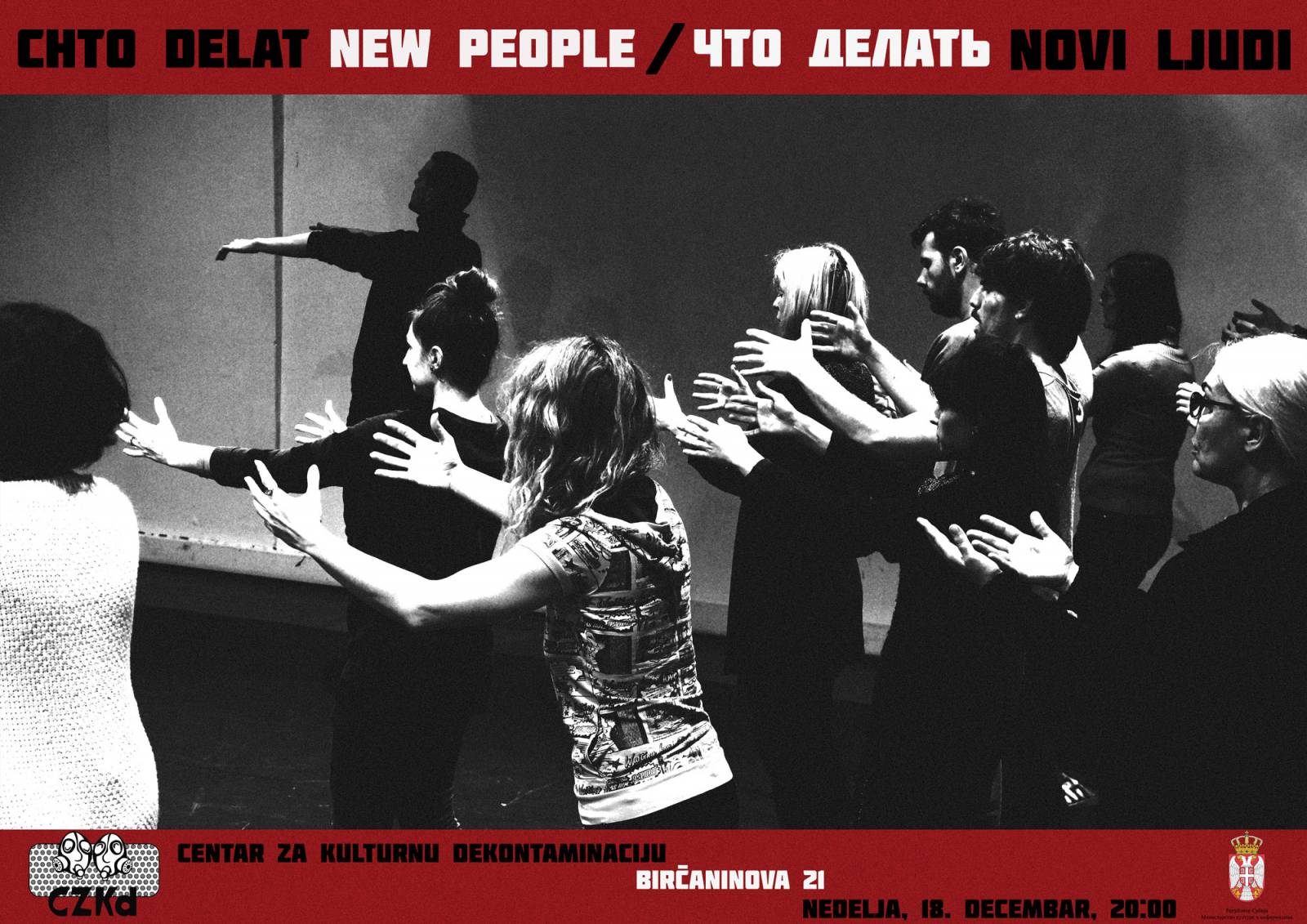 The play is constructed under the protocol of learning play and is a result of one week seminars and rehearsals with local participants and reflects their own vision of general issue of political crisis of todays and searching some ways out from the dictate of old political and aesthetic structures.

The topic of new play is the pivotal for the discussion of any possibility of the political and social change. Who are the people/we/community who will be capable of the transformation of the society? Which direction will it take place? This question was at the base of the whole revolutionary movement of XIX century – In 1863 Chernyshevsky wrote the novel “What is to be Done: Stories about New People”. Now “work on the self” became an essential task in constructing of the new turbo-consumerist subjectivity. How can we counter this development with viable model of singularities which forecast the emancipation project?

In the socialist realist “master plot,” the New Man journeys from elemental spontaneity to revolutionary consciousness under the mentorship of the party. Though fraught with contradictions, this aesthetic paradigm serves as an allegory for subjectivization. But how can we reconsider this set of ideas into completely new situation?

How do the new people relate to their bodies?

How do they labor, fight, love?

How do the new people relate to the “people” (narod)?

<– What kind of organization do the new people need to embody the collective subject? A party? A soviet (council)? Assembly? ………..?

– Are the new people epic heroes or typical men and women of their times?

What journey do they complete?

– What contradictions define the new people and their emergence (becoming)?

– Do the arts need to keep promoting the idea of new people and change despite its subjugation to the interest of capital?

– What kind of aesthetics could “represent” the new people?

– Would the culture of new people be called art?

The topic of new play is the pivotal for the discussion of any possibility of the political and social change. Who are the people/we/community who will be capable.

Chto delat collective: Olga Egorova, Dmitry Vilensky, Nina Gaceva, Oksana Timofeeva
Chto Delat (What is to be done?) is a collective that was founded in 2003 in St. Petersburg, and counts artists, critics, philosophers, and writers from St. Petersburg and Moscow among its members. The collective came about following the urgency of merging political theory, art, and activism. The collective also publishes Russian-English newspaper Chto delat? that covers questions of culture and politics in an international context. Since 2013 the collective initiated an educational project The School of Engaged Art in St. Petersburg.

Since 2013, the Russian Collective Chto Delat (www.chtodelat.org) has conceptualized and implemented an experimental educational platform – the School for Engaged Art in St. Petersburg, supported by Rosa Luxemburg Stiftung (Moscow).

Supported by: Ministry of Culture and Media of the Republic of Serbia and Vreme magazine