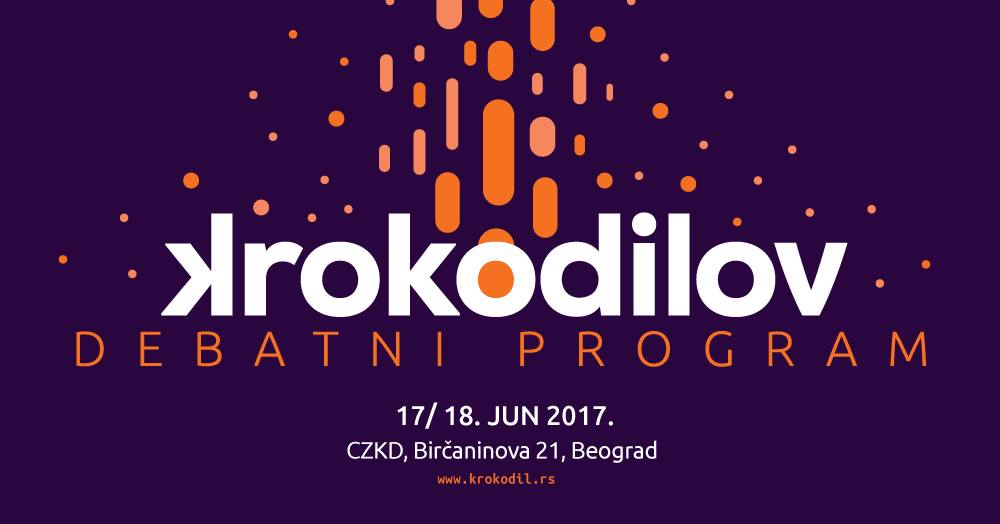 Besides sofa interviews and readings as integral part of the evening program, this year KROKODIL festival will organize different round-table discussions aiming at the hottest topics of today’s society(ies) and politics, from the perspective of arts and culture. Debate programs will be held on June 17 and 18 in Centre for Cultural Decontamination (Birčaninova 21).

Discussion entitled About Biljana Jovanovic, starting on Saturday 17 June at noon, is dedicated to the life and work of this reknowned, but today somewhat forgotten writer and peace activist. Present at literary scene since the second half of the seventies, Biljana Jovanovic has, through the specific treatment of the subgenre called the jeans fiction, singlehandedly redefined elements of the so-called „female fiction“ in Yugoslavia, making it rebellious and dangerous, which are the epithets that she has curageously carried until her premature death in 1995. About Biljana Jovanovic, and her literary, feminist and anti-war activism, two of her long term friends and associates Borka Pavićević and Svetlana Slapšak will discuss, with moderation by Vladimir Arsenic.

After the debate about Biljana Jovanovic, there will be another debate entitled Witches, and dedicated to the position of women in public sphere on the territory of former Yugoslavia. Inspired by the insulting title that the pro-regime media in Croatia used to under one name gather the different vocal opponents to the regime such as Dubravka Ugresic, Rada Ivekovic or Slavenka Drakulic, this debate presents some of the most reknowned writers and activists from this region to discuss the similarities and differences in the way female voices are being percieved and the means that male patriarchal mainstream uses (omnipresent both in politics and the media) to fight against it. Participants: Svetlana Slapšak, Olja Savičević Ivančević, Lamija Begagić and Mima Simić.

Two societies that have made a strong impact on our territories have almost vanished in the first half of the 1940s. Jewish community before Second World War had more than 70.000 people, out of whom only 3500 survived the Holocaust, and that number hasn’t significantly improved in the years that followed. Domicile German community before WWII had more than 500.000 inhabitants, and in the post-war years has been lowered to less than 10%, and now it includes not more than 10.000 people. Using their extensive private and family experiences, Ivan Ivanji and Slobodan Šnajder have written two magnificent, disturbing novels about the events that have turned these two communities into shadows. Discussion under the title Shadows – about the Disappearance of the Volksdeutscher and Jewish communities in Yugoslavia will be moderated by Igor Štiks, on Sunday June 18 at 18.00.

The closing debate of this year’s festival will be About the Declaration on Common Language and other demons, with Snježana Kordić, Teofil Pančić, Dragan Markovina and Igor Štiks as participants.
After the two-year project Languages and Nationalisms, and the six months in which the Declaration on Common Language has been written and presented to the public with the huge amount of both positive and negative reactions, this debate on Sunday June 18 at 19.00 will include some of the most active participants in its inception, who will discuss what the Declaration has achieved and what it hasn’t, how it was perceived in four countries of the region, what is the objective power of the document to make differences it anticipates, as well as what the plans for the future are. Moderators: Ana Pejović and Vladimir Arsenijević.