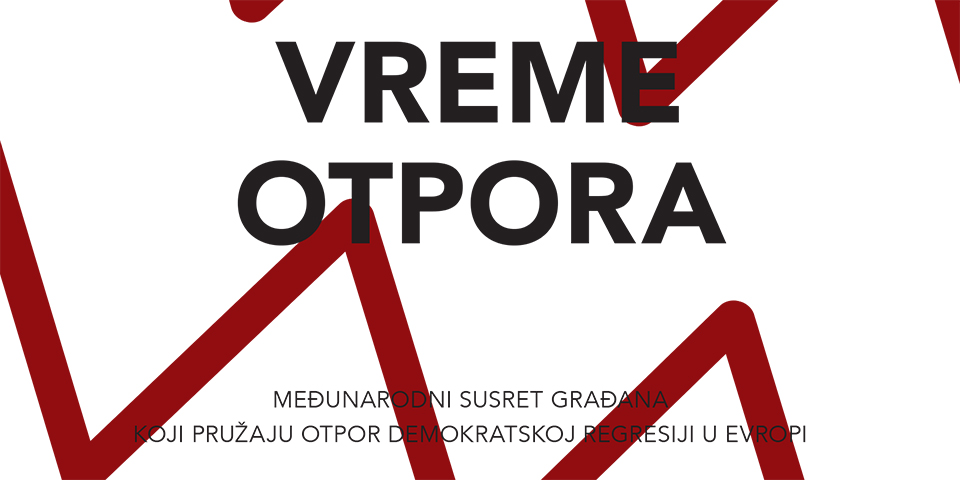 What connects the social movements and protests which emerged in  different countries in Europe in the past few years, is the discontent of citizens towards incapacitated or alienated institutions they depend on.  Beside the right-wing appropriation of discontent, which leads Europe to further disintegration, social movements and protests against inequality, racism, authoritarian usurpation of power and for the defence of basic  human rights show how far the regression of democracy has gone and point to the obsolete or corrupted mechanisms which are not resisting the wave of conservative counter-revolution.

Our conference is the initial event of a solidary action, putting together methods, ideas, programs, experiences, chances and obstacles, in order to build a stronger front for democracy. Critical thinking, resistance and international solidarity are the fundamental values of Europe, which we evoke to rethink our common future and overcome the consequences of the de-legitimization of democracy. Democracy has been taken for granted, but it is a practice that has to be thought through and developed every day. That is why we invite movements and protests which carried and continue to carry the idea of democracy in the streets and squares throughout Europe, reclaiming public space and public good, to meet and find common ground for future wider actions, to transform the memory of freedom into its social reality.

Democracy will either revolutionize or fall to  counter-revolution.

Center For Cultural Decontamination (CZKD) in cooperation with CCFD-Terre Solidaire

Greetings by the team:

11.00
OVERVIEWS OF THE TURMOIL — Panel discussion

All around Europe large movements have emerged. Why? In which political context? Analysis and critical views on several recent citizens’  protests.

In the past few years the social injustice, corruption, election frauds and media censorship gave reasons to people for protests, solidarity actions, strikes. Resistance in the streets and in the workplace can trigger change, either in the realm of political mechanisms or in a new form of solidarity for future actions.

• Mateusz Kijoswski — KOD Committee for the Defence of Democracy,   Warsaw

How the experience of the independent culture and its emancipation during the transition can contribute to establishment of a dynamic public mobilization field around social and political issues? The examples from Croatia can be a starting point for the discussion.

17.00
“STORIES OF THE STREETS“, ISTANBUL — Presentation by Özge Çelikaslan Social movements and human rights activism in Turkey through research on video activism, documentation and digital archiving of political  acts.

Migration is one of humanity’s most basic instincts — to go in search of new horizons. If we use the term crisis, it is appropriate to speak about the crisis of the fundamental European values and the regression of European vision regarding    the dealing with the refugees. It is inclusivity that brings security — belonging, not belongings.

Plenum discussion and articulation of a common  declaration

The open gathering of all, “plenum”, has been a form of organizing the students’ rebellions in Zagreb in 2009 and Belgrade in 2011. During 2014 protests in Bosnia, plenums became for months a public space to bring citizens back to politics and take collective decisions.

Summing up the shared views and information about the initiatives, examples,histories of resistance, we invite our colleagues and wider public to a free discussion in the form of plenum. The equal treatment of all the participants and the direction of the discussion will be moderated by Igor Štiks. Our hope is  to come up with a declaration on our future solidarity and potential modality of common actions.

Simultaneous translation will be provided for this plenum.

The program including participants’ biographies is available here.