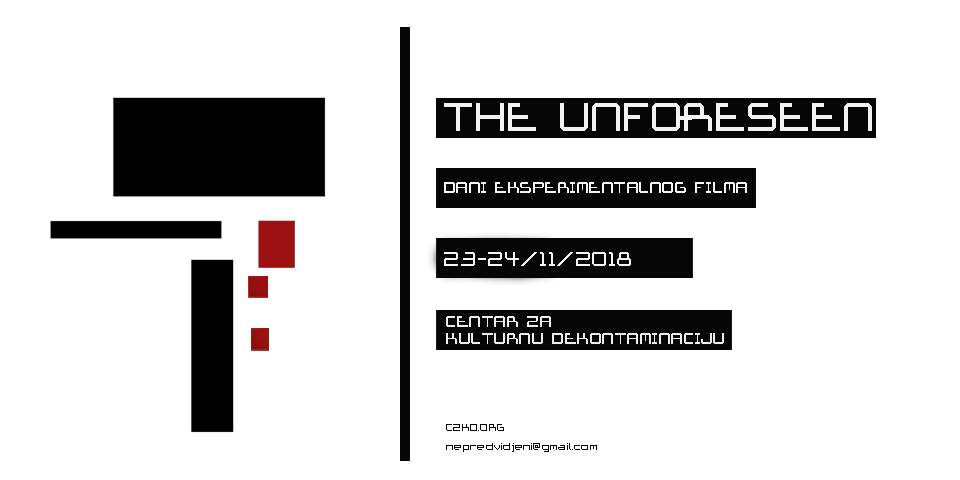 Open call for applications to participate in the 3rd annual International Experimetal Film Festival – The Unforseen, taking place at CZKD from 23rd to 24th November 2018.

This curated program is brought to you in collaboration between The Unforeseen Film Festival and the analogue film lab and audio-visual initiative from Belgrade, Kino Pleme. The aim of this selection is to showcase the most exciting works of analogue and digital cinema today, coming both from the circuit of international film labs and filmmakers who work independently on 8 and 16mm and in digital formats.This program is a continuation of previous festival editions, focusing its attention on contemporary international experimental film production, which incorporates the achievements of modern technologies in the development of the film language and its forms.

Live Soundtrack is the longest running monthly audio-visual happening in Belgrade, organized by the film lab and analogue film initiative Kino Pleme. Focusing on rarely seen and recently (re)discovered works of short experimental cinema and animation around the globe, we’re also leaning towards the archives of cine clubs to find some hidden jewels and to inspire their possible (re)appraisal. Along with (expanded) cinema , we’re exploring different facets of local electronic, ambient and electro-acoustic music, already historically linked to providing scores to some of the more forward thinking works of cinema.

Films in three genres (experimental film, experimental animation and experimental documentary) can be submitted to The Unforeseen Festival by November 12th, 2018. Films have to be produced in formats 8mm and 16mm,  produced in the last year, digital and should be no longer than 20 mins in length. And, please, no (!) landscape, glitch and video art works, we are not going to watch them!

Films need to be submitted in digital formats (preferably mp4) via wetransfer to: nepredvidjeni@gmail.com