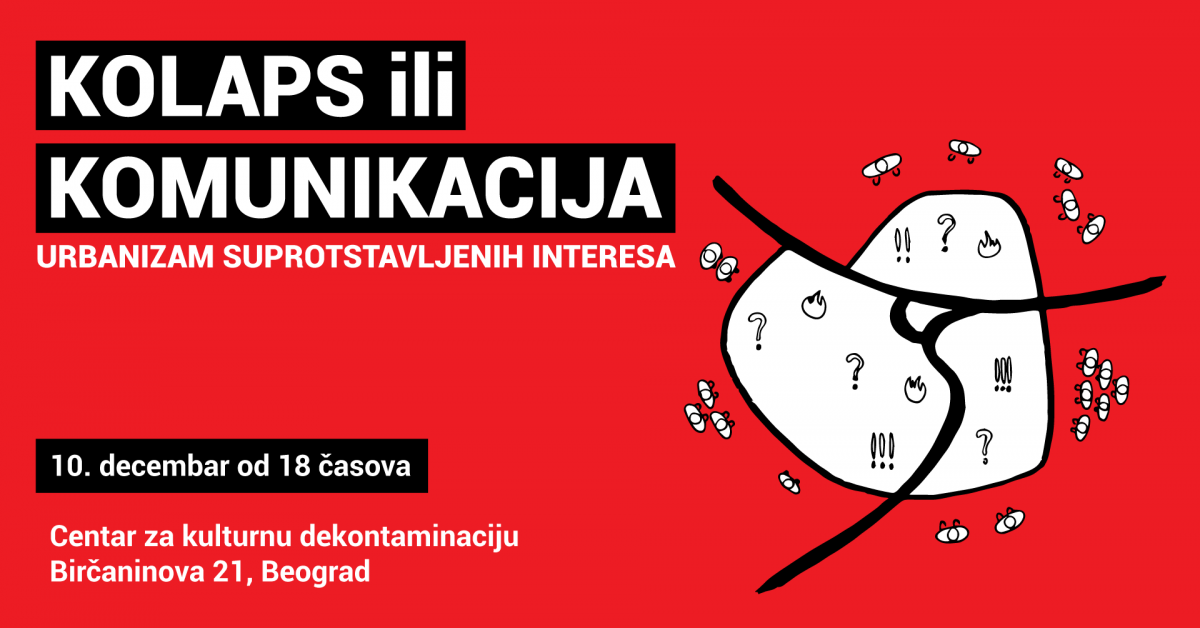 A public discussion about the way we regulate the spatial development of Belgrade, “Collapse or Communication: Urbanism of Conflicting Interests” will take place on Tuesday, December 10th at CZKD.

Construction in Belgrade is an area of numerous conflicts between social actors. Different actors have different interests, and thus different expectations from the results of construction. Due to the cacophony of different voices that can be heard with every new construction case, there is a lack of information and dialogue, and the process itself is often difficult to understand, as well as the procedures and the causes of the problem as a whole. So spatial development of our cities all too often becomes a space of conflict of extremely opposing positions, specific perspectives from which different social groups act.

How should we understand the existing conflicts and where can we expect the resolution to come from? How should we act in the future in order to avoid conflicts? What is the role of urban planners and urbanists in that regard?

Planning as a collaborative activity is convenient for controlling urban development in a wider context which acknowledges the legitimacy of the interests of all social actors – interested parties from all three sectors: public (government services, public corporations), private (investor) and civil (citizens and associations of citizens, NGOs, civic initiatives). With that, collaborative direction of urban development nurtures public dialogue as a tool for achieving balance between different interests toward using spatial resources.

Collaborative planning practice is based on creating an arena for an argumented debate. With the aim of developing a city based on overcoming conflicts and the reconciliation of legitimate interests, we invite you to participate in this process, through a public discussion about the way we regulate the spatial development of Belgrade, on December 10th, at CZKD.

The discussion is preceded by case studies presentation and mapped conflict points, processes of spatial development in Belgrade, conducted by the MA course Integral Urbanism alumni of the Faculty of Architecture, University of Belgrade, and the presentation of Urban Planning in Belgrade: trends, tasks, roles – from the perspective of urbanist Ana Graovac.

The public discussion is realized as part of the project Toward a Collaborative Governance which CZKD is working on in collaboration with the MA course Integral Urbanism alumni of the Faculty of Architecture, University of Belgrade, and with the support of the Heinrich Boll Foundation in Belgrade. The project is realized within the CZKD program cycle Understanding the City.