The program realizes in cooperation with the team of the project “Genealogy of Amneisa” was held on September 29 via Zoom platform. The extensive research initiated by Marina Gržinić, Sophie Uitz, Šefik Tatlić and Jovita Pristovšek from the Academy of Fine Arts in Vienna focused on the genealogies and histories of the dominant discourses of memory, culture of commemoration and historical revisionism in the region of ex-Yugoslavia, in comparison with the situation in Belgium, Austria and Spain. More than 100 individuals, collectives, organizations and institutions participated in the project, and the participants from Serbia were gathered in a seminar in CZKD in 2018. In September 2020, CZKD and the Academy of Fine Arts in Vienna co-published the book “Dialogues for the Future: Genealogy of the Amnesia” (Dijalozi za budućnost: Genealogija amnezije, CZKD, 2020), which followed the previous publication of the project titled “ Opposing Colonialism, Antisemitism, and Turbo-Nationalism: Rethinking the Past for New Conviviality.” (Suprotstavljanje kolonijalizmu, antisemitizmu, i turbo-nacionalizmu: ponovno razmatranje prošlosti za novo prijateljstvo; Cambridge Scholars Publishing, UK, 2020). The two publications and the ongoing research were presented by the project team (Marina Gržinić, Sefik Tatlić, Jovita Pristovšek), which was the starting point of a discussion with the participants of the project from Serbia (members of the Antifascist Alliance of Serbia, Women in Black, KC Rex, and others) about the various aspects of the politics of memory and culture of commemoration in Serbia and the region of ex-Yugoslavia.

The video recording of the discussion can be found on the following link: 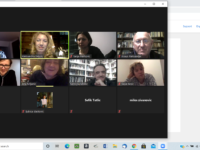