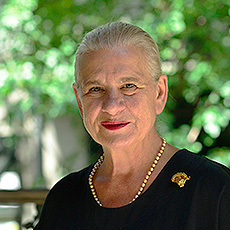 Borka Pavićević is the founder and director of the Center for Cultural Decontamination (since 1994).

She graduated (1971) and obtained a master’s degree at the Academy for Theatre, Film, Radio and Television, in Belgrade (1976).

She is the recipient of the Otto Rene Castillo Award for Political Theatre, New York (2000); the Hiroshima Foundation Prize for Peace and Culture (2004); Osvajanje slobode (“Winning of Freedom”) prize, awarded by the Maja Maršićević Tasić Foundation to a woman “whose acts affirm the principles of human rights, rule of law, democracy and tolerance” (2005); Routes Award given by ECF, Amsterdam (2009/2010); The Government of the Republic of France, the Legion d’Honneur (2001).