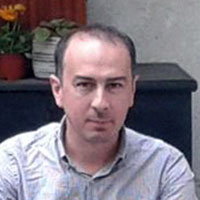 Dragan Škorić is the head of technical organisation at the Center for Cultural Decontamination.

He takes care of the entire complex of CZKD venues – Pavilion, Debate Center on the first floor, as well as offices, archives, Library – film studio, and Garage, as a central meeting place, and a courtyard where events take place.

He excelled in sound and light equipment and overviewing of the programs in the CZKD, maintains the infrastructure for independent production and cooperation with other organizations, the authors and participants of the program.