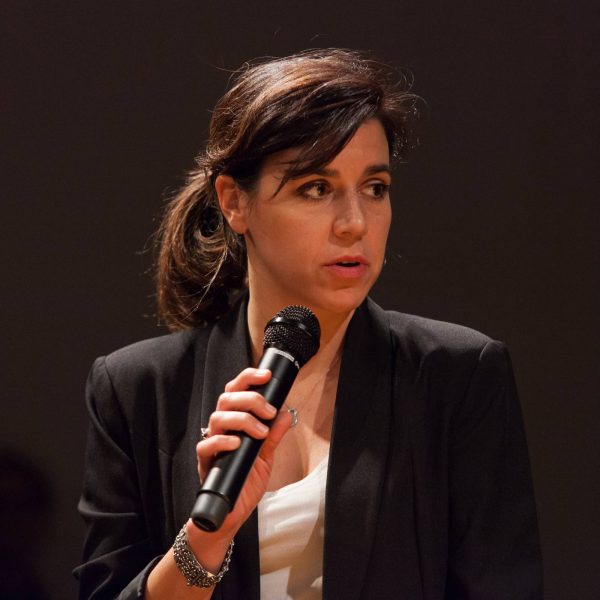 Ljubica Slavković is an author, project manager and program curator at the Center for Cultural Decontamination.

She has been a team member of the Center for Cultural Decontamination since 2013. She is responsible for developing and implementing the CZKD policies and strategy through their own and guest programs, and is the author of the CZKd program cycle “Understanding the city“, which, in the previous five years has hosted and presented numerous local and international practices in the fields of urban politics, architecture and cultural heritage. Within this project cycle, Ljubica has organized and led a wide range of programs consisting of lectures, international debates, student and expert workshops, exhibitions, screenings etc. Among these were the seminar and exhibition “Bogdan Bogdanović: introduction to the Oeuvre” (2015) and the international forum “Creating a Concrete Utopia: Architecture in Yugoslavia, 1948 – 1980” (2017), both realized in cooperation with the Architectural Faculty of the University of Belgrade, public discussion and presentations “Collapse or Communication: Urbanism of Conflicting Interests” (2019), realized as part of the project Toward a Collaborative Governance which CZKD is working on in collaboration with the MA course Integral Urbanism alumni of the Faculty of Architecture, University of Belgrade. Also, together with Do.co.mo.mo Serbia, she has co-founded the digital repository “The Archive of Modernism” (Arhiva modernizma) within this program cycle’s activities. The aim of the program cycle is to broaden knowledge on the social production of space, to understand architecture and urbanism as social, cultural and political practices, to re-politicize space, strengthen citizen participation and to create space for an  intercultural and historical dialogue.

Ljubica is a graduated architect and PhD candidate at the Faculty of Architecture, University of Belgrade. Her field of interest lies in the politics and production of space in contemporary Belgrade, as well as that of Socialist Yugoslavia. Besides her work at CZKd, Ljubica is active as a researcher and has published over 100 articles and chapters for domestic and foreign publications (Wohreveue, Magazyn Miasta, Mas Context, Dérive, Eurozine, Bratislavské superštruktúry, Bureau Savamala Belgrade, City Magazine Belgrade, Novi Magazin…). She was the Editor in Chief of the Belgrade edition of Swiss architectural magazine and research platform, Kamenzind (Camenzind) (2014 – 2017). On the 36th Salon of Architecture of Belgrade, she received an awarded for architectural critique (2014). She is an author of the first architectural map of Belgrade, the Modernist map of Belgrade (2017), and the first architectural map of Skopje, the Modernist Skopje Map (2018) both produced by Blue Crow Media from London. She is a co-author of the animated movie “Our Belgrade Waterfront” (2015).

Presenting the development of modern Belgrade, with a special focus on informal practices and their role in the society, Ljubica is a frequent guest lecturer at the Belgrade visiting university programs (AA School of Architecture, MIT Architecture, ETH Zurich, Hochschule Luzern, Karlsruhe University of Arts and Design, Royal Academy of Art The Hague, TU Delft…). She was presenting at numerous conferences such as the DIAGNOSE 1968/2018 (Critical Perspectives on the Legacy of Reform and Revolt in Architecture, Planning and Urbanism, Berlin 2018), Nonument! (Symposium dedicated to hidden, abandoned, forgotten monuments of the 20th century, Prague, 2019); Captured Institutions (IFDT, Belgrade, 2018). Ljubica is the author and facilitator of several workshops (On Forgotten Monuments, The Map of Non-transparent Urbanism, The Reanimation of Architecture), while also guiding different Belgrade and Yugoslav landscape architectural tours (The Paths of Corruption, Belgrade on Water, Belgrade Informal, The Rise of Belgrade Modernism, Remembering Landscape – with Branislav Dimitrijević…). She has worked as an architect in the architectural offices of Bolles+Wilson (Germany), the Archtic Studio and the DV:A studio (Belgrade).

Ljubica is a member of Docomomo international network, and the local ULUPUDS. She was also a core member of the civic initiative Ne da(vi)mo Beograd (Don’t let Belgrade d(r)own), started in 2014.