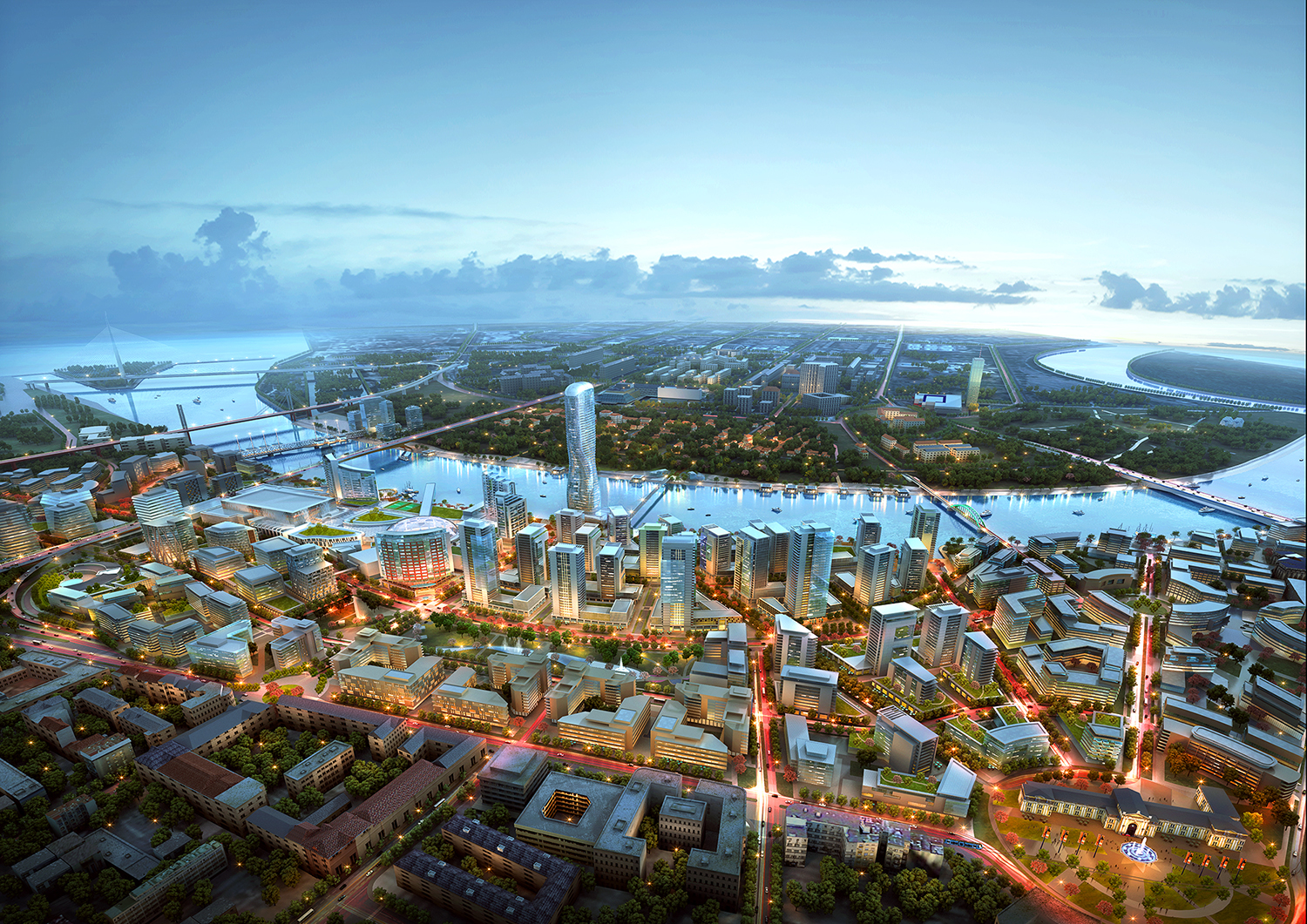 What exactly is it about the ‘Belgrade Waterfront’ project that isn’t quite right? If an architectural review is to be considered pertinent and its criticism constructive, it should be unbiased, so to then reply ‘everything’ as the answer to what’s not right about the project, doesn’t exactly sound unbiased, and yet, unfortunately, this is the truth. Because objectively, there isn’t a single aspect of the ‘Belgrade Waterfront’ project that is either solvent or viable in the long run, or has adequately answered the existing urban planning needs of the area. To put it simply the project ‘just doesn’t hold water”. Why are we then taking it as an excuse to celebrate Belgrade? How can something as seemingly tenuous as this project in all its unsubstantiated details, exist at all?

Constructive criticism is there; there isn’t a shortage of those who have used valid arguments to demonstrate, verbally or in writing, what is wrong with this project and why. Unfortunately the number of those trying to find excuses for this whole farce – leap-frogging the basic principles of law, economy, architecture, urban planning, ecology, infrastructure and social justice – is far greater. Justifications such as ‘better this than nothing’ or ‘better this than the state of the riverbank right now’, or even, ‘well, since they are going to rip us off anyway, let them build something while they’re at it’. Some even respond to criticism of the project with the retort: ‘do you have that kind of money to invest?’

The ‘better than nothing’ approach to architecture and urban planning is a huge mistake that has disastrous long-term consequences. One does not need to look far to see the impact this ‘better than nothing’ approach has already had on the city of Belgrade – just take one glance at all those buildings built in the 1990s. In those days anyone could build any way they wanted, and they did, without any regard for standards, legal regulations, or common sense. Who ever had money erected a building, and those buildings have lasted. Because buildings are not temporary structures, they are permanent. They are here to stay and shape the environment and subsequently the life of generations to come; we shape our houses and then they shape us. These buildings were not constructed according to greater schemes, but in accordance with investors’ desires. Everyone building then, tried to seize the opportunity for purely personal gain at the expense of the common good. And now the same thing is happening again with this ‘Belgrade Waterfront’ project, the high-level plan (General Urban Plan – GUP 2021) is being amended to fit the needs of a low-level plan, so as to fulfil the investors’ wishes. And no, you can’t say that this is a different situation because urban construction in the nineties was just plain illegal. These new amendments to the GUP, adopted expressly to meet the needs of the ‘Belgrade Waterfront’ project, were in fact put forward by an Interim Council (which it is worth noting, has already ceased to exist), and were approved during a session of the City Council by using a breach, or misinterpretation, of the official legislative procedure. These amendments can therefore be considered illegal, and consequently, so can the entire construction. Do we feel good around those buildings built in the nineties? No, we don’t. We won’t be feeling any better on our estranged riverbank either. The fact is, that here in Serbia we are all too used to the powers-that-be stealing from us in this way, which itself is indicative of how prolonged and systematic the destruction of the people’s will has been. People’s whole mentality, including their perception of the issues involved, needs a complete overhaul. Here we have a perfect example of an error in judgement that results from an understanding based on on false premises. No, it is not better to ‘just let them build something as they will steal from us anyway’. Surely the better, and the only acceptable situation, is that no one steals from you. And that no one can actually get away with building ‘anything’.

As for the last ‘excuse’, the one that says that only those who have a similar amount of money to invest actually have the right to criticize, this also proves to be wrong. Sure, let’s look at things from the perspective of market urbanism, let us give the carte blanche to those who have money, assuming that investors want the best for their money and want to see those investments pay off in exactly the way expected. We may as well agree to renounce the public interest altogether and sell everything for cash. Why was it that the Sava riverbank land was not offered to investors in the form of a public auction, to let them raise each other’s financial bids? How can we ever know that there wasn’t also someone else who ‘had that kind of money’ and was willing to invest it, when no one else ever had the chance to make an offer nor ever will, as it now seems.

A healthy market is one where there is healthy competition, and not a monopoly. Especially not if this monopoly is hidden behind a thick, dark screen. This kind of ‘investor urbanism’ does not represent equal opportunities or a healthy market. Re-tailoring large-scale urban plans to meet the needs of smaller-scale plans, just to please the investors, represents a direct breach in the procedures of urban planning. A lack of adherence to procedure in the urban planning process, annuls the raison d’etre of the urban plan itself. Our state agencies and public institutions seem to be standing down and yielding the city up to investors, even offering their services to defend their interests. So who is standing up for the public interest?

And no, the ‘Belgrade Waterfront’ isn’t going to be pretty either. It was alarming to see just how many people bought into this cheap trick with the shiny 3D model (in fact, it was probably rather expensive) that doesn’t even accurately portray the terrain on which the project will be built, neither does it show what the area will really look like in the future. Belgrade is not a flat surface. The steep slopes of Kalemegdan fortress do exist, and are not some detail one can neglect when representing the city of Belgrade, and the same applies to many of Belgrade landmarks and houses protected by law, that have forged the city’s identity over history. Exactly which ‘Belgrade’ is being represented? Because the Belgrade shown in the 3D model presented to the public has very little to do with the actual city. The 3D model also completely fails to address some of the most important issues. It overlooks the fact that the majority of the city’s population uses public transport to get around (which requires physical space), that numerous cars will need garages, and ultimately, that an urban project of this magnitude requires extensive analysis and planning, which we absolutely don’t see here. The model may be pretty to look at, an impressive work of art, a triumph of design. But this model falls short of demonstrating the true complexity of architectural urban planning, or really explaining how the city of Belgrade will look in the future. This is why the 3D model of the ‘Belgrade Waterfront’, when assessed in the context of the purpose for which it was created – is worthless: just a house of cards. And anyone can see this, alas if people would only look at it properly and not just stare in silence. The key issue is that this 3D model is the only existing official document explaining the intentions of the project, even though its implementation is already well under way.

These facts alone should be more than enough for many (wise) people to make a judgement. It is obvious. And the various proofs of the situation, outlined here, are not biased speculation, they are simple facts. It is just very unfortunate that people do not seem to be able to see this.

The number of people this project concerns is so huge that their collective weight really has the potential power to influence the future; no matter how little they may think they are or whether they think they have a right to have a say. At the moment people are not saying anything at all, and they really should be speaking up. No one speaks up because no one is being asked, no one wants to be the first to speak out, preferring to keep quiet. But this in itself, this silence, has become the norm and this should not be normal and this is the real problem here.