Other drones will fly overhead 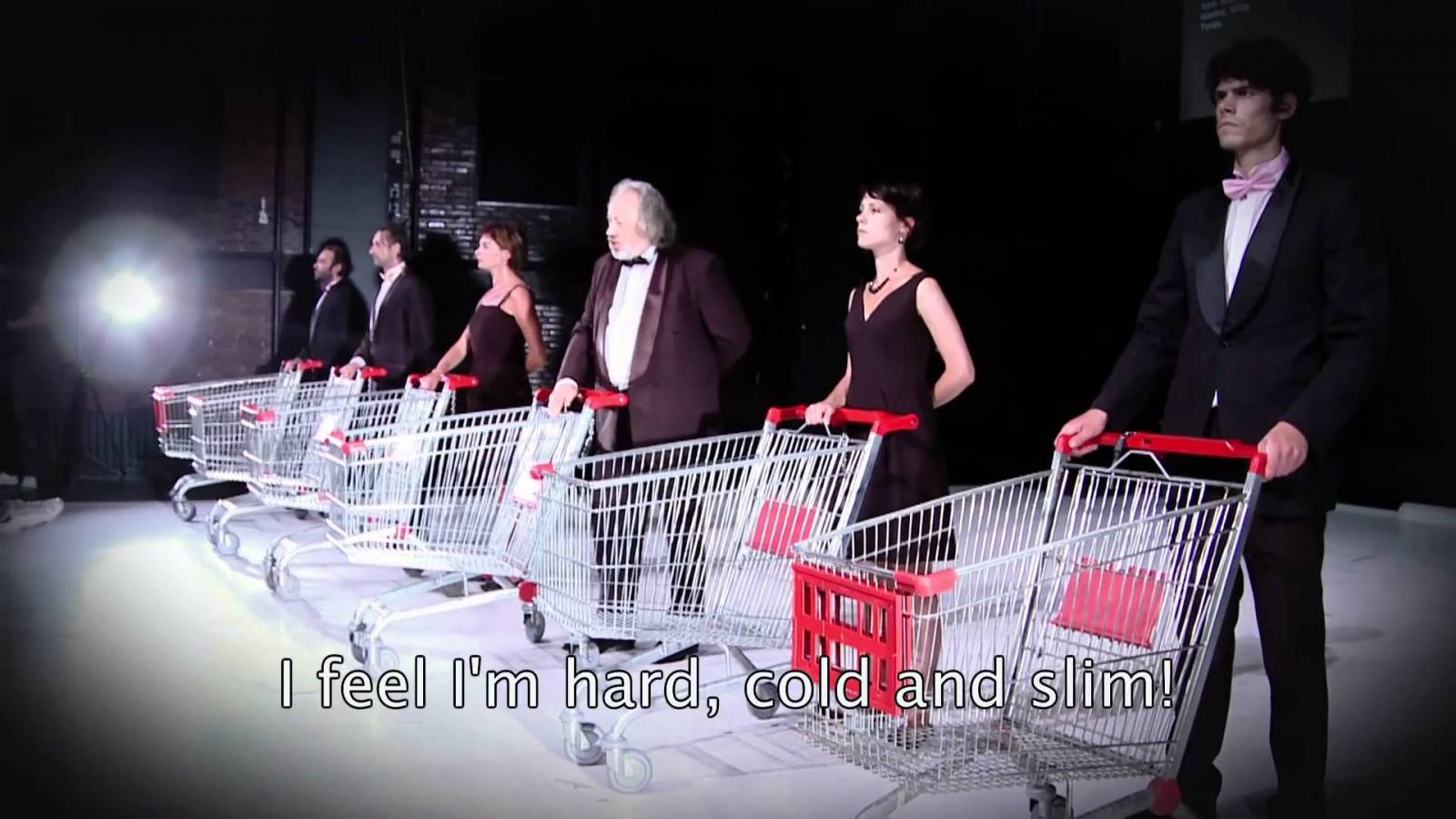 In 2008, Kosovo’s Qendra Multimedia and Serbia’s Kulturanova initiated and realized an ambitious project, its final phase peaking with the theatrical play Patriotic Hypermarket, which premiered in October 2011 at Bitef Theater in Belgrade. The actors were Albanian and Serbian, with a director from Bosnia and Herzegovina. Cynics would say that in this group, only a Croat is missing.

The theater where the play was performed (in Albanian and Serbian) was naturally guarded by police. In the long-awaited premiere, there was extensive applause, maybe the longest an actor could ever dream of. It was a truly emotional applause. The public was applauding the play and the actors, but above all, I believe they were applauding the fact that after all these years, an artistic project in which Serbian and Albanian actors could perform together was finally made possible.

The realization of the play had its challenges, of course. The pressure on the actors and others involved in the project was significant, and that pressure came from politics, the public, and from the artistic community itself. Even before the play premiered it was being called ‘anti-Serbian’ in Serbia, while in Kosovo it was dubbed ‘anti-Albanian’. I remember at one point during those days of working in Belgrade, we had decided to come back by plane from Belgrade to Skopje.The old Serbian JAT plane in which we flew shook as it battled the wind and the falling rain. During that short flight, one of the Albanian actors said to me: „If this plane falls, we’ll die as traitors. I hope we can stay alive this time once more, so we can make a patriotic play as well.”

In general, the work of inter-ethnic cultural cooperation in the Balkans resembles the removal of land mines, carefully deciding where to place the next step. But I truly saw that applause in Belgrade as a message of triumph that the public was transmitting to the voices of opposition, who viewed the play and the cooperation with ‘them Albanians’ with scorn.

People who are active in these types of Serb-Albanian cultural  cooperation are in the cross-hairs of labeling and stigmatizing. However, the circle of artists involved in these cultural exchanges has broadened significantly over the past few years. More Serbian artists are willing to come to Kosovo and work together with Albanian artists, and vice-versa. Many Kosovar artists that felt rancor when such cooperation was mentioned are today involved themselves in such collaborations.

These partnerships, although seldom, have had a fundamental affect on the relaxation of Serbian-Albanian rapport. This has been an important process, and one which must be intensified even further. Both Albanian and Serbian culture have been built on the tenets of excluding one another throughout the centuries, denying, denigrating and condemning one another.

Perhaps it sounds overambitious, but let’s pose a simple question: without this kind of cultural cooperation, would this political dialogue between the two governments be possible? I say no. Essentially, cultural endeavours between artists from Kosovo and Serbia have absorbed a good deal of that energy of contempt and hate, an energy that has accumulated from years of opinion, and in turn it has drained the nationalist frustration on both sides, paving a road on which even politics can walk.

About four years after Patriotic Hypermarket, another ambitious Albanian-Serbian project was realized. But now, the circumstances and conditions were completely new, although not necessarily more favorable.Romeo and Juliette, directed by renowned artist Miki Manojlovic and produced by Qendra Multimedia of Prishtina and Radionicai Integracija of Belgrade, premiered in April in Belgrade and on May 15th it comes to Kosovo. Once again, there were police forces outside of the National Theater of Serbia where the performance was held, and the same will happen in Prishtina. Despite all these barriers, however, this play has moved Albanian-Serbia cooperation to another more ambitious level.

Public attention has been outstanding, as well as that from local and international media. The total impact of this project still remains to be seen, though it is quite encouraging that both governments have contributed to such a project for the first time, as well as the fact that both plays are being performed in the National Theaters of both states.  Another important difference is that a very small number of actors were willing to participate in Patriotic Hypermarket, whereas many were interested in Romeo and Juliette. Around 80 actors went to the auditions, which were held in Prishtina for this play. These steps may look like small ones, but they are actually gigantic.

But this ‘triumph of art’ must not fool us. Because, over the skies of Serbia and Kosovo, a drone might fly again one day. And then, once again, the weapons will be drawn, and if not blood, racist rancor will definitely flow on both sides. And once again, we artists will find ourselves stuttering about the role of art, to get people to come closer to one another; we will once again read on the media about this or that play or exhibition, that becomes the first to travel to Belgrade (or Prishtina), after this or that ‘drone’. Unfortunately, we will have drones over our heads for quite a bit longer.

It may also be naive to wait on Kosovo and Serbia’s political castes for support with cultural exchanges between the two countries in the future. It is often difficult to be  optimistic in this direction, because they essentially do not believe in the political process of normalization of rapport, and even less do they believe in some kind of benefit from cultural exchanges between the two states.

Despite this unloving landscape, I’m sure that after a few years cooperation between Kosovars and Serbs will be a natural thing, and it will be almost completely stripped of political context. In other words, a theatrical team from Belgrade visiting Prishtina will not make news. News will be made by it’s quality or lack thereof. And the same will be said for Kosovar artistic creations being presented in Belgrade.

Many years ago (when Kosovo still lacked its office in Belgrade), I humorously called the Center for Cultural Decontamination in Belgrade (CZKD) the  ‘Cultural Embassy of the Republic of Kosovo in Belgrade’. People laughed and I don’t remember seeing any frowns among the public in Belgrade. And really, spaces like CZKD have created the cultural history of this region. Those were the places that were ‘liberated’ from fascism, racism, nationalism and many other ‘isms’, which we;ve had enough of in the Balkans for the past two decades.

However, these types of ‘cultural embassies’ cannot be created by governments; they are created by people, artists above all.

This article was originally written in Albanian.