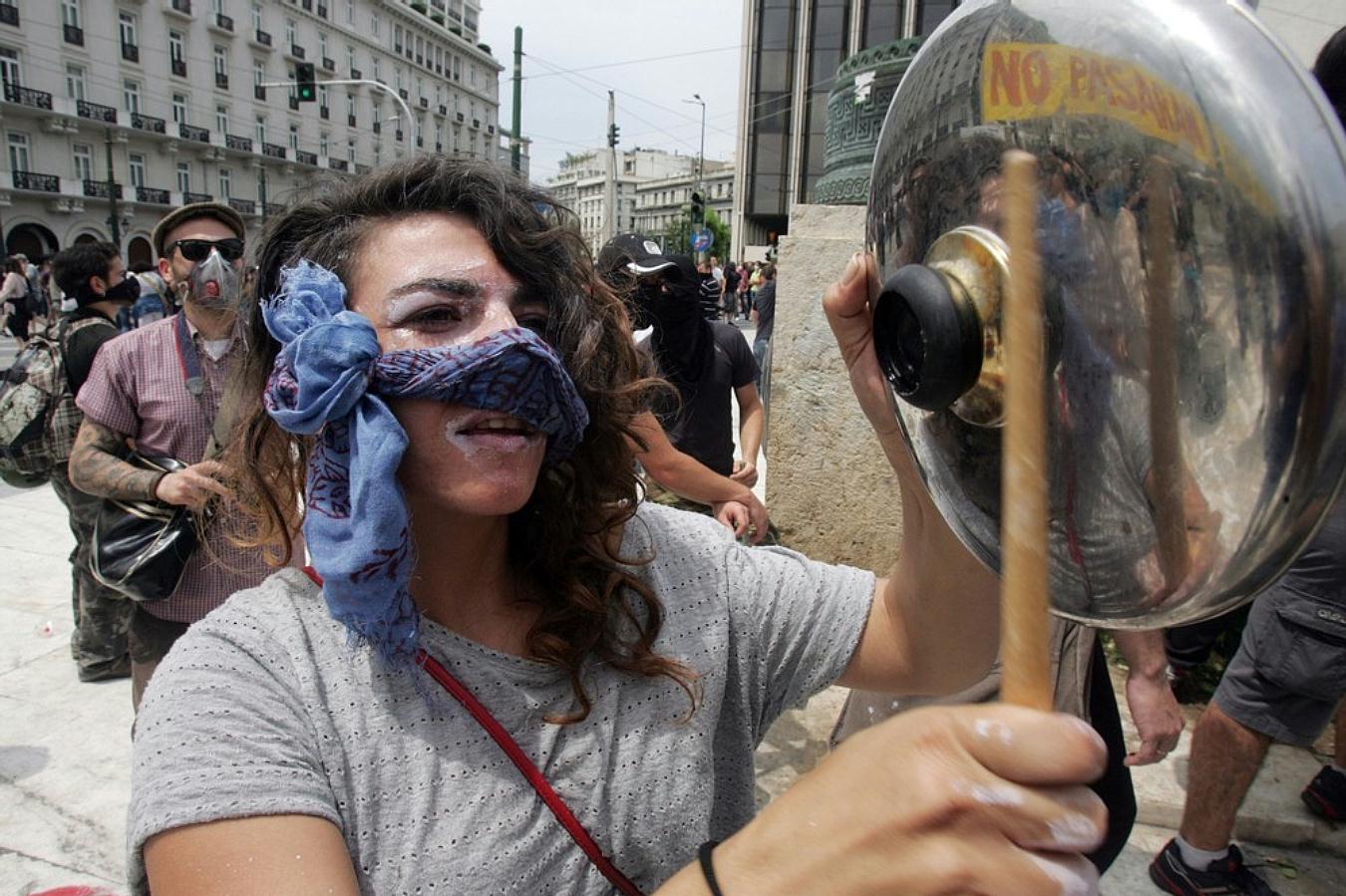 It is the fear in front of a white page; in this case, the fear to write about other everyday fears, which haunt us. And sometimes we don’t want to speak about. A Saturday night in Thessaloniki. In front of my apartment-building, a young man approaches me. It is obvious he is addicted person and he will ask me for money.

I sink my hands in my pockets and I secure my bag behind my back. “Hey girl, any help?”. I smile to him and keep searching in my pockets. You can never find coins when you need them. “What a shame asking for money from a young person, even younger than yourself. I find it normal with older people but you are more or less my age”. He keeps talking to me in a very kind way. I somehow relax a bit. It is this tense of unpredictable that conquers you in such cases. “It is terrible. At least few years ago you could find a job and earn a daily minimum wage every now and then. Now…”.

“It is Saturday night and I should treat you a drink somewhere, not asking you for money”. I finally find a two-euro-coin and I take my hand out of my pocket. “Here you are” I say, “have a good night and who knows, things might change. One Saturday you will be out with a girl enjoying a drink”. He smiled widely and left.

Greece holds the first place in overall unemployment among 28 member states of the European Union (28%) also having the highest unemployment rate among young people (those under 25 – 61.4%) according to the latest Eurostat figures. In absolute figures these rates mean that last autumn 174,000 young people were in a job-seeking process in a total of 1,388,000 unemployed people.

Recently I followed a conversation on Facebook regarding job applications and the passion young people should show when they apply for a job. What to write in the mandatory field “Why do you want to work for us?”. “Because I want to get my self-esteem back by working” somebody comments triggering the debate. Plus it is all about experience. “Of course! Experience is what you get, when you don’t get what you want”, I borrow the quote from a famous comic series.

And what about the working minority? It is always nice meeting friends and sharing their news. Especially during Christmas holidays, when the prevailing atmosphere is festal and people kind of happy! But wait. Have you ever experienced this feeling that you don’t want to ask them anymore what they are doing and how is life, being afraid to hear of their response? I met a friend with whom we studied together and I hadn’t seen her for a year. She finished her MA and moved back to her family’s flat. This return-home-process seems as an invincible virus. What a sad step back during the adventure called life. Teen rooms are filled again with young people sitting on the same bed they were dreaming to grow up, leave, be independent and start their own life.

My friend, as some thousands of young people in Greece, are employed under OAED’s (Manpower Agency of Greece) programmes for unemployed people. Talking with her a bit before Christmas she told me that they had their training in August and started working in September. “We will get paid ‘at some point’ having a hope that by the end of the year we will get 300 euros for the training month” she told me with continence. “This would be amazing since I will have some money during season holidays!”. But no. They didn’t. Fairytale gone bad.

Another friend said it all: “I get crazy when I watch the news. It’s inconceivable that those politicians are still here. Those who have decided we work for nothing in fake-five-month-unpaid jobs (the programmes mentioned above) covering up unemployment rates and in the end we are even thankful for this situation… Without even having any hope to work and live decently”.

Nevertheless, the country is doing better. We have a Government Budget Surplus and our MPs cheered after the voting process in the Parliament. No matter if Greeks live in cold homes since the majority doesn’t use central heating because of the super-expensive petrol prices. Some of the surviving strategies involve some not-so-safe heating methods. Last December a headline shocked me: a teenager was found dead from asphyxiation because she and her mother were heating their place with a brazier. It is not only her but after a while such incidents stop being on the daily news. The greatest misery is to get used to the misery.

Anyhow spring will come. Spring will also bring European Elections. I doubt if the anger of young people will be translated into higher rates of participation in the elections. According to Eurobarometer data, 46% of young Greeks will not vote in the upcoming elections. 2/3 of them will do so because they think nothing will change and that European Parliament as a EU institution does not meet the problems they face.

To be honest, I deeply understand them. First of all, EU has been demonized. We wait for a change that does not seem to come although we work hard for it and we sacrifice even more. Secondly, there seems to be a lack of solidarity. Those who badmouth all Greeks and how corrupted and lazy we are, act morally improper by judging a whole people indiscriminately and they ignore the facts. Current figures prove them wrong, showing how many more hours Greeks work compared to other Europeans. North and South, rich and poor, hardworking and unproductive appear as dipoles, but they are not, should never be and we should never have to experience them like they are. Because it is not useful.

What makes things better is connection. But some gaps in real life seem quite big. Mind them and put yourself in the shoes of a story above. In such a case would you want to vote? And if yes, what might be an option?

This article is part a part of a series of reflections by young Europeans, prepared in cooperation between FutureLab and Süddeutsche Zeitung Online. To read the original click here.