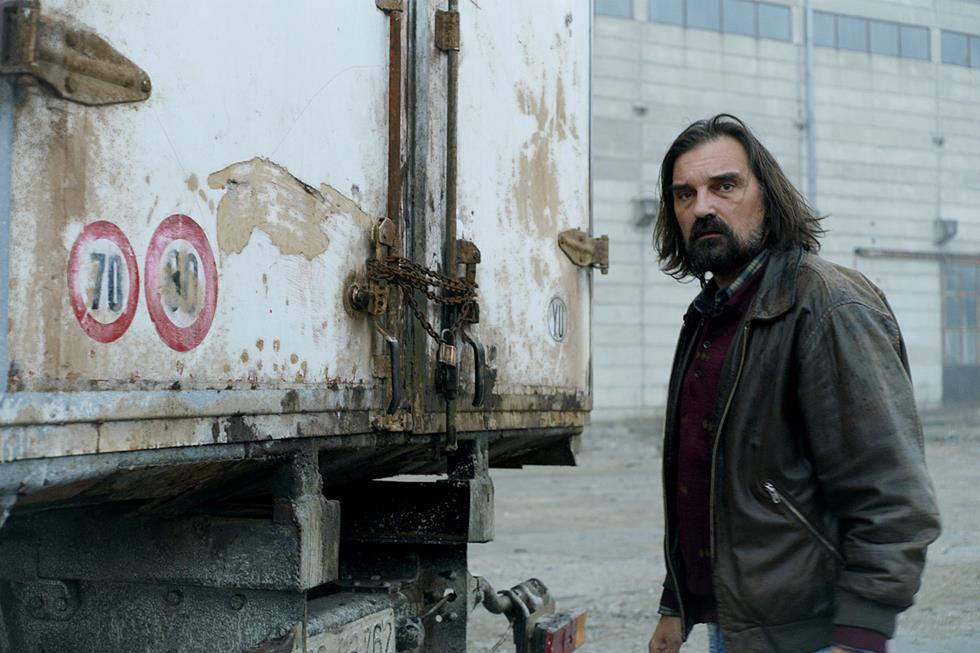 A truck driver undertakes a dangerous journey across war-torn Kosovo

If any colour represents the long-term impact of war, it’s the blend of beige and grey that fills The Load’s quietly powerful frames. The shade is so prominent that it’s plastered across nearly every surface of the film — concrete buildings, dreary countryside, dull skies, grim faces — and also so common that it’s easy, eventually, not to take much notice of it.

While The Load deploys one man’s experience to convey the cost of war, Glavonić weaves other perspectives into the film

That’s the same impact that NATO’s 1999 bombing of Serbia had on its residents, filmmaker Ognjen Glavonić posits; as explosives rained down for months, the conflict proved a horrifying daily reality that was soon a standard part of the nation’s everyday routine. Taking inspiration from shocking real-life events, the writer-director’s debut fictional feature goes a step further, illustrating that the emotional toll is both utterly inescapable and often relegated to fester in the recesses of memory.

It’s a weighty, complex subject, but one this clear-eyed political thriller doesn’t shy away from at any moment. A strong inclusion in Director’s Fortnight as well as a the perfect companion piece to Glavonić’s Berlin-bowing 2016 documentary Depth Two, The Load should take its probing contemplation of the contradictions inherent in coping with war on a tour of the festival circuit — and, coupled with its superficial similarities to both The Wages of Fear and Sorcerer, arthouse audiences are also likely to be receptive.

Whereas Depth Two delved incisively into a true account of war crimes, The Load avoids specific details, instead focusing on just over a day in the life of truck driver Vlada (Leon Lucev). Making a living ferrying cargo during the airstrikes, he’s charged with an important run from Kosovo to Belgrade. His instructions are simple: no stopping once he starts driving, and he must avoid traffic and all attention. As for the truck’s contents, they’re mysteriously unknown — at least to him.

Still, Vlada is quickly aware of the potentially murky moral terrain he’s traversing; a match, of sorts, to the bombed-out landscape he’s crossing. Glavonić peppers the journey with complications; with fire blocking the main road, 18-year-old hitchhiker Pava (Pavle Čemerikić) offers the only directions to a new route and Vlada is swiftly forced to break all of the stated rules. The eventful trip barely registers on his wearied face, however, though mentally and emotionally grappling with the bigger picture of war leaves a permanent imprint.

Indeed, to stare into Lucev’s eyes is to stare into the soul of a man silently burdened by pain and guilt. It’s a memorable performance that couldn’t better encapsulate The Load’s tone: pensive and piercing. The Croatian star isn’t short on words, but speaks volumes when he isn’t saying a thing — all of which cinematographer Tatjana Krstevski (returning from Depth Two) captures with precision, often from within the truck.

While The Load deploys one man’s experience to convey the cost of war, Glavonić weaves other perspectives into the film, as well as reminders of other battles. Not every vignette-like diversion away from Vlada proves necessary, but briefly following a selection of people who cross his path, particularly those of a younger age, helps give the feature a multi-generational dimension. Similarly, not every old memorial or family keepsake strictly adds to the story, but, to a movie about tussling with the past, they amplify the weight of history.